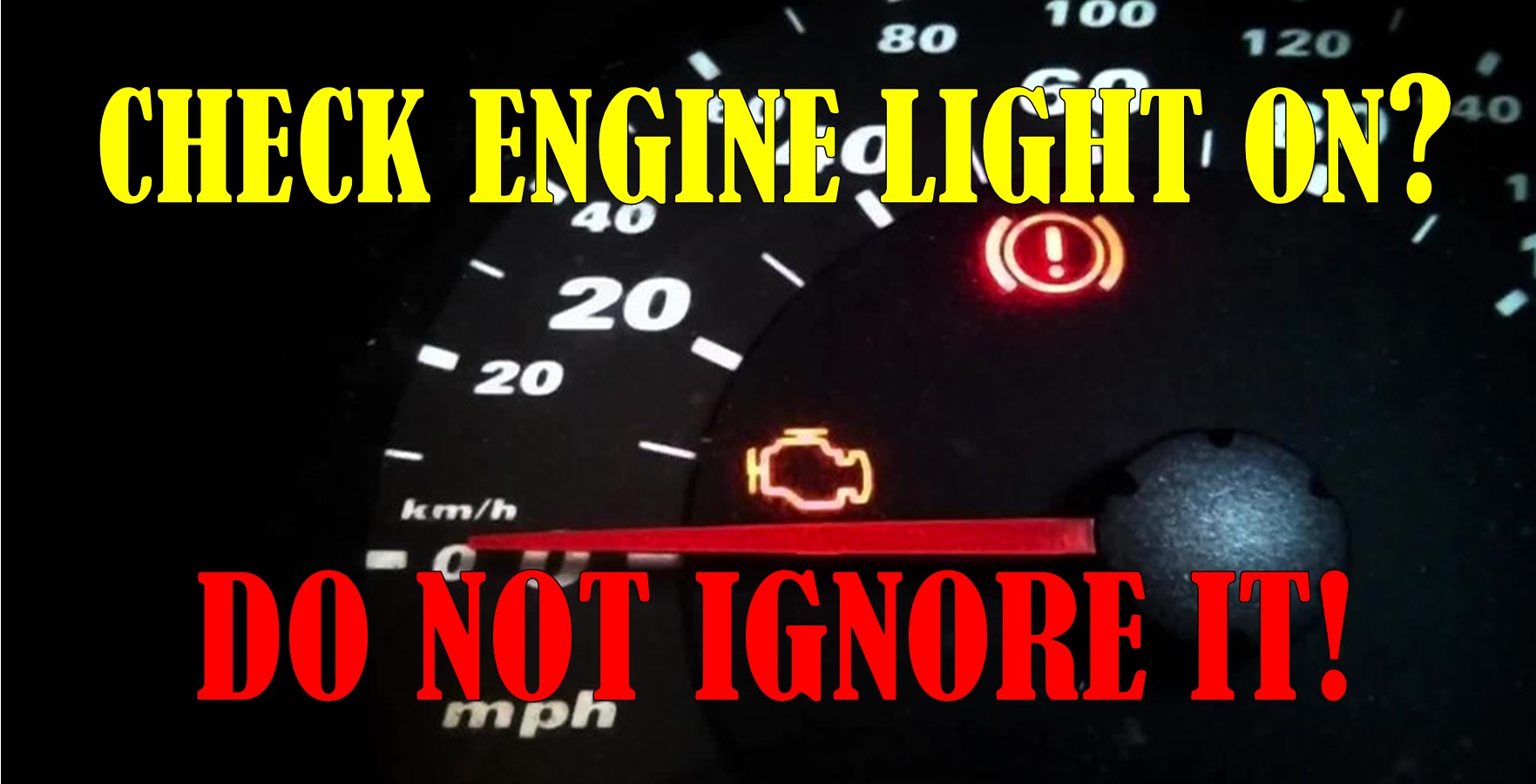 What Does the Check Engine Light Really Mean? How can you determine whether your car has a loose fuel cap – or other serious engine problems!

If your light is on, it typically means the car’s emissions control system is faulty and the vehicle is polluting the air beyond allowable federal standards. A vehicle in this condition would fail an emissions inspection or smog check.

Do not confuse the check engine light with the maintenance or service light. These lights illuminate when a routine service is due. They are usually triggered by mileage, gallons of gasoline consumed, or some other type of vehicle-use measurement.

Sometimes, the problem comes and goes. This is referred to as an intermittent or soft failure and can cause the light to flash, stop flashing, and then start again. The problem appears only when certain conditions appear. For example, the loose connector or broken wire that keeps connecting and disconnecting when the vehicle travels over bumps or irregularities on the road, causing the light to turn on and off for periods at a time.

When the check engine light flashes continuously, it means you have a critical problem that will cause serious damage if neglected. Usually, this originates in a misfire that allows fuel to pass into the exhaust manifold and down to the catalytic converter where high temperatures ignite the fuel. Eventually, this condition will damage the exhaust system or catalytic converter. You need to fix the problem soon before a minor repair turns into a major and expensive one.

What is a vehicle code scan? A car code reader is a car diagnostic tool. They are designed to interface with a car’s computer and report trouble codes that can trigger check engine lights and  identifying potential other vehicle problems.

There are literally hundreds of different codes a Check Engine Light can represent. it is important for you not assume what a code means if you do not have a lot of automotive knowledge . When your Check Engine Light comes on, you should get it checked out quickly by a Canadian Auto Remarketing certified mechanic before you risk damaging your car further by not diagnosting and repairing the issue right away.

Free Check Engine Light Scan! Never ignore what your vehicle is telling you to do when you see the engine warning light on.

How Does it Work? Free Check Engine Light Testing.

What is the difference between checking the engine codes yourself and taking it to Canadian auto remarketing shop?

Canadian auto remarketing professional shop invests thousands of dollars in diagnostic equipment and training for licensed automotive equipment not available to consumers. While yes, both yourself and Canadian auto remarketing can read the engine computer’s stored codes, and through other sources, determine likely causes based on thousands of mechanics intel, none of these can pinpoint with 100% accuracy exactly why the CEL came on.

Many times, multiple sensors are telling us something, but not telling us why, and in nearly all these cases, the vehicle needs to go to Canadian auto remarketing, where more specialized diagnostic equipment can diagnose the vehicle while the car is running and determine exactly what is going on beyond just trouble codes. A code scan reader and a certified technician with thousands of dollars in diagnostic equipment and accessibility to comprehensive fixes using an extensive database of repair solutions are NOT the same equivalent at all.

Canadian Auto Remarketing is offering a FREE Code Scan on any vehicle for a limited time. Please call us at 780-569-0654 or just stop in.

The orange, engine-shaped icon on your car dashboard’s instrument cluster is programmed to turn on when the vehicle’s electronic brain detects something is wrong. Do not panic if you see it — it does not necessarily mean you will need to give your next paycheck to get it fixed. Problems that trigger a check engine light are sometimes basic and quick to fix. Do not ignore it, either, bring your vehicle to Canadian Auto in St Albert to get it checked out as quickly as possible.

The oxygen sensor (sometimes called an O2 sensor) measures the amount of unburnt oxygen in a car’s exhaust system. It sends data to the vehicle’s computer, which uses it to regulate the mixture of air and fuel that enters the cylinders. An engine will keep running even if an O2 sensor needs to be replaced, but it will burn more fuel than usual. In the long run, a bad O2 sensor can damage components like the spark plugs and the catalytic converter. It may also cause a car to fail an emissions test.

On average, a quality O2 sensor will set you back about $175, but the cost of labor will vary greatly depending on the vehicle’s make and model, as well as your geographical location. Finally, keep in mind that most late-model cars have more than one O2 sensor.

A loose fuel cap is one of the most common reasons why the check engine light turns on. The cap is a crucial part of a car’s fuel delivery system. It notably prevents gasoline fumes from leaving the fuel tank, and it helps keep the whole system under the correct pressure.

If your check engine light turns on immediately after a fill-up, pull over and make sure the cap is not loose — or still on your car’s roof. Sometimes the cap needs to be replaced, but it is not a problem that is going to hit your wallet hard.

The catalytic converter is integrated into a vehicle’s exhaust system. It turns the carbon monoxide generated during the combustion process into carbon dioxide. It is a fairly simple part, and its failure can often be prevented. That is good news, because a new one costs between $200 and $600 depending on the make and model. Every late-model car that runs on gasoline has a catalytic converter.

Performing regular maintenance (such as oil changes) on time is key to keeping your car’s catalytic converter in working order. If you live in the city and mostly drive short distances, take your car on the highway every now and then to ensure the catalytic converter does not get clogged. And as always, keep your eyes and ears open for unusual sounds or discolored smoke coming from the exhaust.

Put simply, an ignition coil generates the electricity the spark plugs need to ignite the fuel and air mixture in the cylinders. Classic cars have a single coil, but many modern vehicles use one coil per cylinder. If your ride has a V8 under the hood, you could have eight separate coils. The monstrous Bugatti Chiron has 16. No matter how many you have though, a malfunctioning coil will almost certainly trigger the check engine light, but remember, if your car burns diesel, you have neither ignition coils nor spark plugs.

Speaking of spark plugs, worn or fouled plugs can cause a variety of issues including an engine misfire and hesitation under heavy acceleration. A worn coil can exhibit the same symptoms and can cause the car to shut off unexpectedly.

As its name implies, a spark plug wire transfers electricity from the coil to the spark plug. Without it, the fuel and air mixture in the cylinders would not ignite. The vast majority of cars use a single wire per cylinder, but there are models — notably, some older Mercedes-Benzes — with two spark plugs per cylinder, and consequently two wires.

Symptoms of bad spark plug wires include a rough idle, a noticeable drop in engine performance, and lower gas mileage.

The mass airflow (MAF) sensor monitors how much air enters the engine. It is a part of the engine-management system, so your car would not be able to adjust to changes in altitude without it. Symptoms of an MAF failure include a rough idle, trouble starting, and a sudden change in the position of the throttle pedal. Reduced gas mileage and stalling can also indicate a MAF problem.

Issues with an aftermarket alarm

An aftermarket alarm can wreak havoc on your car if it is not installed properly. It can drain the battery, trigger the check engine light, or even prevent the vehicle from starting. Then, when you least expect it, it will go off in the middle of the night because a leaf from an oak tree fell on the hood.

If the above issues sound familiar, you will need to have the alarm fixed, reinstalled, or replaced entirely by a competent mechanic. Getting it done right in the first place might cost a little bit more, but the peace of mind that comes with having a fully functional alarm is priceless.

Every car has a vacuum system that performs a wide variety of functions. The brake booster is vacuum-operated, and the vacuum system also helps lower harmful emissions by routing the fumes as gasoline evaporates through the engine. If your car’s idle begins to surge or settles at an unusually high rpm, a vacuum leak could be the culprit.

Vacuum hoses can dry out and crack as they age, especially if they are exposed to intense heat or extreme cold. This is the most common cause of vacuum leaks. Other common issues include cracked fittings and loose connections. tracing the source of the leak can be time-consuming.

The exhaust gas recirculation (EGR) system lowers the amount of nitrogen oxide that comes out of the car’s engine and helps it run more efficiently. It directs the hot exhaust gases back into the combustion chambers, which warms up the fuel and makes it easier to burn. It also reduces emissions. The EGR valve can get clogged up or fail entirely.

The battery is as simple as it is important; without it, your car will not start, light up the road ahead, or charge your phone. Today’s batteries last much longer than before, and they are maintenance-free. The price of a new one depends on the type of car you drive.

Changing or charging a battery on your own is a relatively easy task, but keep in mind that in some late-model cars, it is buried under countless plastic covers, and it might be a little difficult to access. Also, note that disconnecting the battery will often reset your stereo system. If you do not have the code, ask your local dealer for it before you unbolt the positive and negative terminals. Otherwise, you will be driving in silence.